b. Explain how xylem tissue is adapted for its function in the plant. (5 marks)

“Candidates who described the physical attributes of a xylem vessel element in detail, in some instances including an annotated diagram, gained high marks for part a). Part b) asked candidates to explain how xylem tissue is adapted for its function and answers could have included an explanation of the function and structure of xylem parenchyma and sclerenchyma fibres as well as the xylem vessel elements. For the vessel elements, candidates could have referred to the lack of cell contents and breakdown of end-walls to make flow easier and reinforcement of the cell wall to withstand pressure without collapsing.”

The examiners comment that an annotated diagram was a good addition to this answer. As a general guide, diagrams are extremely useful – they convey a lot of information accurately and are often quicker to produce than a written description conveying the same information. In the exam they show the examiner that you have a good understanding of the subject. If relevant to the question, we’d always recommend including a diagram in your answer.

A xylem vessel element is one of the cell types found in xylem (the water conducting tissue of plants). Xylem tissue contains two types of conducting cells, tracheids and vessel elements. The vessel elements are tube-like and stacked end-to-end to form long, strawlike vessels. At maturity, vessel elements have no cellular contents and consist mainly of thickened secondary walls. Vessel elements develop from undifferentiated living plant cells which have cellulose walls. The cells become elongated and their walls become impregnated with lignin – a process known as lignification. Lignin is a complex non-carbohydrate polymer which is laid down unevenly on the primary cellulose walls of the vessel. Almost the entire inner surface of the primary wall is covered by secondary wall, except for small areas called pits. The pit is not a hole in the wall, but a small, circular area without secondary thickening. Pits occur in pit-pairs with the pits of neighbouring cells precisely aligned to allow for easier movement of water and dissolved substances from one vessel to the next. The middle lamella and the two primary walls between the two pits together make up the pit membrane. The end walls of vessel elements are modified into perforation plates (see diagram). Most vessel elements possess simple transverse perforation plates with only one large perforation, but compound perforation plates with two or more perforations also occur.

(This answer could be expanded further by discussing dfferent forms of secondary thickening.) 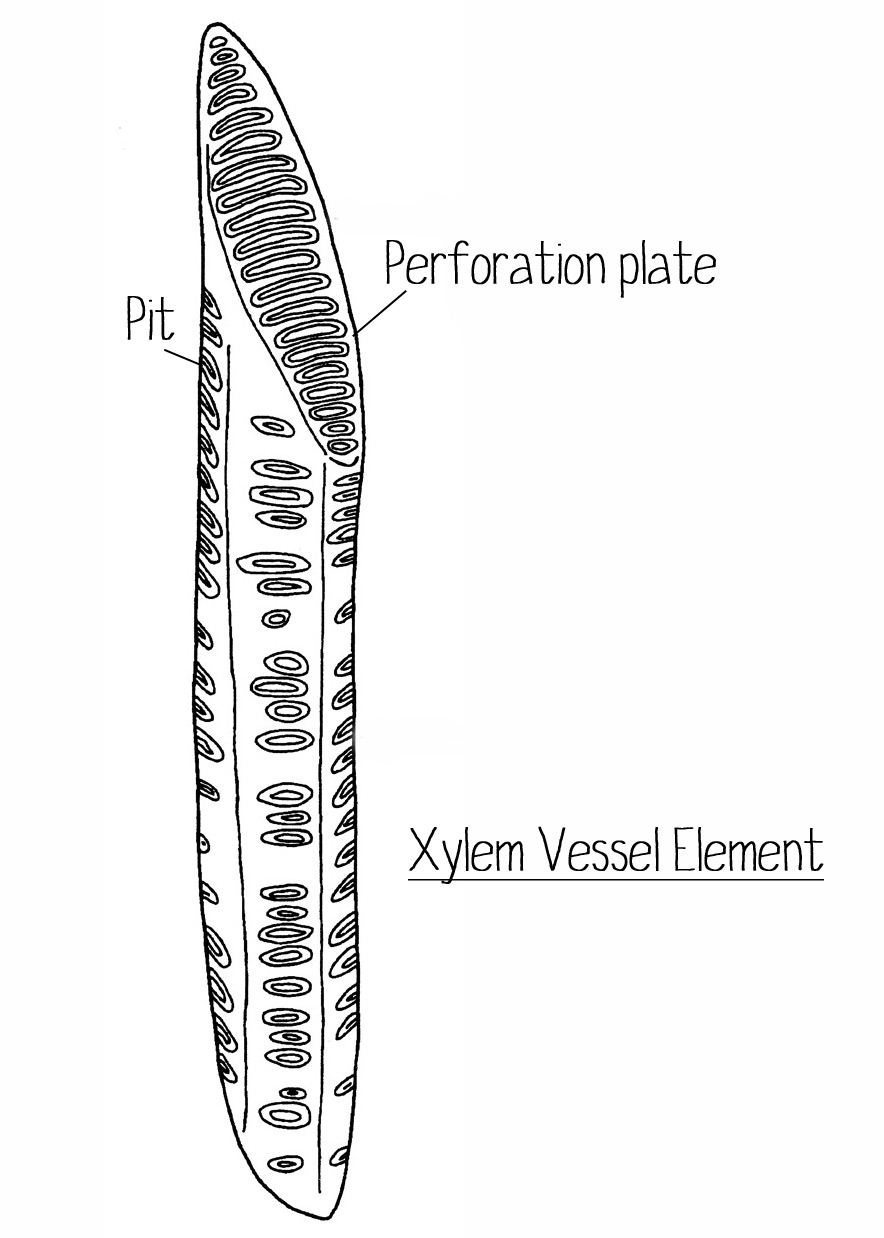 b. Explain how xylem tissue is adapted for its function in the plant.

When tackling questions of this sort, begin by picking out key words:

‘Explain’ – which suggests an indepth discussion is needed.

‘Function’ – a good answer to this question will begin by describing the function of xylem tissue and then explaining how it is adapted to fulfil this function.

Students who did not read this question carefully, assumed that it referred only to the xylem vessel elements discussed in ‘a’ and did not provide a full answer.

Xylem is the tissue in vascular plants that conducts water and inorganic substances from the roots to the above ground parts of the plant, and out the stomates. Xylem contains a number of cell types: