Annuals are plants that go through their entire lifecycle in one growing season.

Hardy annual a plant that lives for one year/completes its life cycle in one year. They are sown outside in March and can survive/withstand frost and temperatures below -5oC. For example, Calendula officinalis.

Half-hardy annual (a plant that lives for one year/completes its life cycle in one year. It can survive in temperatures down to -5oC or is sown under protection from frost and planted when all danger of frost is past, for example, Tagetes patula.

Biennial are plants whose lifecycle spans two years, so they flower and produce seeds in their second year. A familiar biennial is foxglove, Digitalis purpurea. Some plants grown as biennials are, botanically speaking, short-lived perennials, for example, sweet william and wallflower. These plants tend to be dug up after flowering simply because they don’t perform well the following year, or become too untidy.

Perennials are plants that can survive frost and live for more than two years.

The RHS examiners note that it is important to mention secondary growth in any definition of woody perennials.

Herbaceous perennial are non-woody plants that die back to a rootstock each autumn and regrow in the following spring. For example, hop, Humulus lupulus.

(Note that in exam answers asking about herbaceous perennials, the examiners note that the word ‘non-woody’ is important.)

Ephemeral is a plant that has several life cycles in a growing season and can increase in numbers rapidly, for example, groundsel (Senecio vulgaris).

You may sometimes be asked to define these terms in exam questions. The RHS examiners note that the best definitions are those that are ”…to the point and give the full botanical name for the plant example, e.g. for a perennial it is necessary to state that the plant lives for more than two years/seasons rather than many years/seasons. Care is needed to ensure that plant examples are true representatives of the plant type, e.g. Impatiens walleriana, although grown as an annual in this country, is naturally a perennial whereas Tagetes patula is a true annual. Candidates who gave only the generic name, e.g. Digitalis, as an example of a biennial could not be awarded a mark as the genus contains both biennial and perennial species.

This page is part of our 6-week RHS revision email. If you’re currently revising for exams, join our list to ensure you don’t miss any new material or updates. 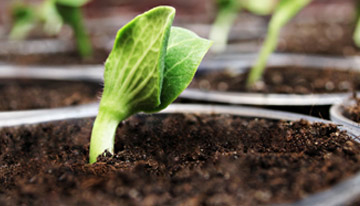