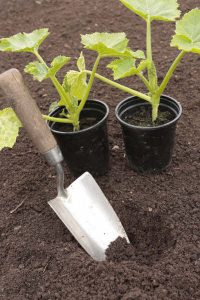 One of the first things we need to consider when assessing land for crops is the type of soil we are working with. The soil type is determined by the proportions of sand, silt and clay particles it contains.

The main soil types are loam, clay, silt and sand, with additional types described as stony, peaty or chalky.

Sandy soils have a gritty texture and are formed from weathered rocks such as limestone, quartz, granite, and shale. If sandy soil contains enough organic matter it is easy to cultivate, however it is prone to over-draining and summer dehydration, and in wet weather it tends to leach nutrients quickly as water runs through the soil.

Silty soil is considered to be among the most fertile of all soils. It is usually composed of minerals (predominantly quartz) and fine organic particles and has more nutrients than sandy soil yet still offers good drainage. When dry it has a smooth texture and resembles dark sand. Its weak soil structure means that it is easy to work with when moist and it holds moisture well.

When clay soils are wet they are very sticky, lumpy and pliable but when they dry they form rock-hard clots. Clay soils are composed of very fine particles with few air spaces, thus they are hard to work and often drain poorly – they are also prone to water logging in spring.

Blue or grey clays have poor aeration and must be loosened in order to support healthy growth. A red colour in clay soil indicates good aeration and a ‘loose’ soil that drains well. As clay contains high nutrient levels plants grow well if drainage is adequate.

Loam is often considered to be the perfect growing soil. Loamy soils are a combination of roughly 40 % sand, 40% silt and 20% clay.

Loamy soils can range from easily workable fertile soils full of organic matter to densely packed sod. Characteristically they drain well, yet retain moisture and are nutrient-rich, making them ideal for cultivation.

Peaty soil contains more organic material than other soils because its acidity slows down the process of decomposition. Peaty soil typically contains few soil organisms, as most of them cannot tolerate the acid conditions.

This type of soil contains fewer available nutrients than many other soils, because although nutrients are present they are trapped in the organic matter. This type of soil often retains too much water and is prone to poor aeration.

Chalky soils are alkaline, usually light brown in colour, and contain large quantities of stones of varying sizes. They dry out quickly in the summer and have a tendency to hold on to trace elements such as iron and manganese so that they are unavailable to plants – this can cause poor growth and yellowing of leaves.

Chalky soil is extremely poor quality and needs regular, substantial addition of fertilizers and other soil improvers. Regardless of the type, soil is also said to be acid, alkaline or
neutral, which describes its chemical make-up.

Soil fertility depends on a combination of the physical properties of the soil and the nutrients it derives from materials and organic matter; these interact and can also be influenced by acidity and alkalinity. The best fertiliser or manure for a particular piece of land depends on the soil type and its chemical make-up. It also depends on the crop we
wish to grow.

A simple hand test can help you to work out the sort of soil you have.

Take a handful and moisten it, then knead it to break up any lumps. Does it feel gritty? Is it impossible to roll into a ball? If yes, then the sample is a sandy soil. If it is gritty and can be made to form a ball, you have a loamy sand or a sandy loam. The difference is not significant.

If the handful of soil does not feel gritty, but forms into a ball that is weak and easily broken, the soil is a silt loam with more clay than sandy particles. A silty soil feels silky or soapy to the touch. A silty loam may show imprints when pressed with the fingers.

As we move towards the heavier clay soils the moist sample more closely resembles dough or plasticine and ranges from medium loam and clay loam to heavy clay. A loamy clay soil holds together well and may be rolled into a cylindrical shape. Heavy clay soil may be rolled even more thinly, and develops a shiny surface when smoothed. All clay soils feel sticky and slightly heavy.

In order to determine the percentages of sand, silt, and clay in a soil more accurately than can be achieved by a ‘feel’ test, it must be brought into a laboratory for analysis.

Mechanical analysis involves the physical separation of soil particles in order to work out exactly what percentage of the soil is made up of each component. There are several techniques available, the most common being the pipette and hydrometer methods. You do not need to know about these in detail for the RHS exams, but basically they involve separating the different components so that they can each be measured.