A frost occurs when the temperature falls below 32 degrees Fahrenheit or 0 degrees centigrade. It is damaging to plants in two ways, water is rendered unavailable to plant roots and the cells of sensitive plants are ruptured. These dangers are linked with the severity and duration of the frost as well as the constitution of the plant, in Britain we leave our Roses unprotected over winter whereas in some parts of Scandinavia and N. America straw or sacking protection is essential.

Late spring frosts which occur after growth has started are the most damaging of all. The danger signs are clear skies in the evening, a northerly wind which decrease at dusk and a settled dry period during the previous few days. The risk to a plant is reduced if there are overhanging branches above, other plants around, heavy soil below and the coast nearby.

Wind: The spectacular effects of a gale are well known, broken branches, knocked-over pots etc. But the effects of persistent winds are less well known, lop-sided due to the death of buds on the windward side, and stunted growth due to the cooling and drying effect on the growing point. On exposed sites a windbreak may be necessary, but never use a solid screen. A wall or closed fence will create down-droughts on either side and plants will be harmed. A hedge, on the other hand, will gently reduce wind speed for a distance of 15 – 30 times its height.

Rainfall: The average annual rainfall is 34 inches in England. Unlike some other areas of the globe there is no distinct rainy season, but October to January is usually the wettest period. The driest region is the Thames Estuary (20 inches), the wettest spots are the mountains of Wales and Scotland (175 inches). The U.K. record, however, belongs in the Lake District (275 inches) in 1954 at Springkling Tarn.

A drought is a period of 15 consecutive days without measurable rainfall, and droughts do occur at fairly regular intervals in Britain. Thorough watering is necessary at such times, otherwise plants will suffer or die. Snow is a mixed blessing, a blanket of snow can protect plants which would otherwise be damaged by arctic-like winds, but heavy snowfalls can damage or break the branches of evergreen.

Altitude: The height of your garden has an effect on the general climate. For every 600 ft. increase in altitude, the average annual temperature falls by 2 degrees and the start of the growing season is delayed by 3 days. Solar energy decreases whereas both rainfall and wing speed increase. 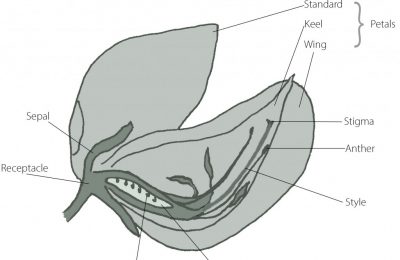